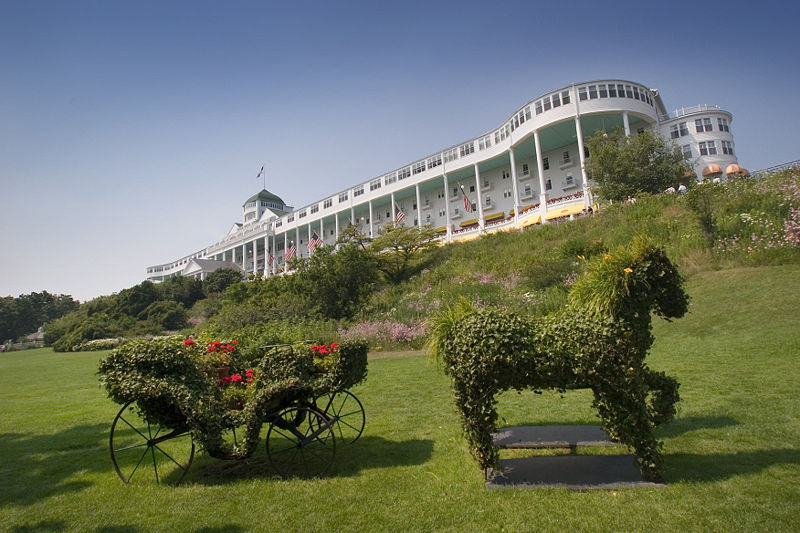 On our way to Holland for our first night's lodging, we'll stop by Saugatuck and take an exciting, dune scooter ride on the sand dunes of western Michigan. We'll arrive at Mackinac Island in the afternoon on the 26th. Mackinac Island is the truly "all natural" theme park of America.

On our way to Holland for our first night's lodging, we'll stop by Saugatuck and take an exciting, dune scooter ride on the sand dunes of western Michigan. We'll arrive at Mackinac Island in the afternoon on the 26th. Mackinac Island is the truly "all natural" theme park of America. Limited to transportation of horse and buggy, bicycle or foot, surrounded by water, it has escaped the vast changes of time. Its real Victorian image is preserved and enhanced by a small population of 500 permanent residents and scores of summer residents, maintaining bluff cottages in original state. We'll spend three nights at the Lake View Hotel on Mackinac Island. Lake View Hotel, in the heart of the historic village, is the oldest continuously operated hotel on Mackinac Island, capturing much of the past with its Victorian-style atmosphere and nineteenth-century vernacular resort architecture. Built by Reuben Chapman in 1858, the hotel was originally known as Lake View.

During our stay, we'll enjoy a carriage tour with Mackinac Island Carriage Tours, the oldest and largest horse

and buggy livery in the world and the official tour of Mackinac State Park. Enjoy the narrated tour through downtown to Surrey Hills, where you will disembark the two-horse hitch carriage and have just a few minutes to enjoy the carriage museum and/or gifts shops while waiting to make the transfer to a three-hitch carriage (you'll need one more horsepower). Then you are off to Arch Rock and a ride through the Boreal forest. So, climb aboard, sit back and relax and just enjoy the ride. After your scenic, carriage tour ride, you will be dropped off at the Grand Hotel, where you will enjoy their fabulous luncheon. You will then have free time to explore the Grand Hotel, as well as the grounds and gardens and continue to enjoy the island. We'll spend one night at the German village of Frankenmuth, MI. We'll enjoy a short driving tour and also visit Bronner's, the world's largest Christmas Store. Also included is lunch at the Bavarian Inn. We'll spend our last night out at the Pear Tree Inn in Indianapolis and also enjoy Newsies at Beef and Boards Dinner Theatre in Indianapolis.

Set in turn-of-the century New York City, Newsies is the rousing tale of Jack Kelly, a charismatic newsboy and leader of a band of teenaged "newsies." When titans of publishing raise distribution prices at the newsboys' expense, Jack rallies newsies from across the city to strike against the unfair conditions and fight for what's right! Based on the 1992 motion picture and inspired by a true story, The Tony Award-winning score features the now classic songs “Carrying the Banner," “Seize the Day," and “Santa Fe".

from $1,190.00 (USD)
Per Person
Contact Us
Terms & Disclaimers
Prices are per-person based on double occupancy, unless otherwise noted.